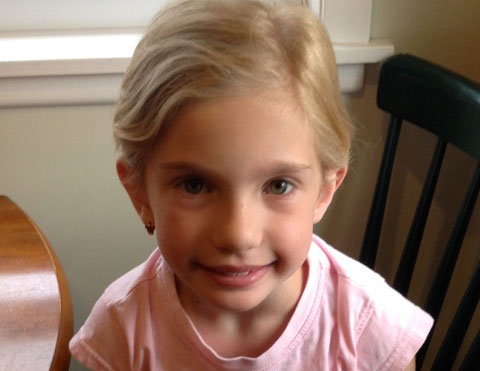 Our daughter Milaina (Millie) was born November 20, 2006. Her pediatrician had sent us to the cardiologist because of the heart murmur he heard at birth and at her 1 week check-up that we were told was fairly common in small babies (she was just over 6 pounds at birth). At 8 days old, we took Millie to see a pediatric cardiologist. As soon as we were bumped up to the next in line for her echo at the cardiologist, I knew something was terribly wrong. The echo took nearly an hour and I tried hard to keep from sobbing out loud during that time. Millie was diagnosed with Tetralogy of Fallot.

We took Millie home and went back weekly to have her oxygen levels checked. At just under 7 weeks, Millie’s stats dropped dramatically and her surgery was schedule for the following week. Though we were not expecting it so soon, Millie had her her full repair when she was just seven weeks old. She was in and out of the hospital in a week. She recovered wonderfully and has been on the move constantly since then (she started walking before she was 10 months old). Millie has also had a heart cath to try and help increase the ow in her pulmonary valve.

We were recently at her 6 month check-up and although Millie will most likely need another surgery at some point in her life to replace her pulmonary valve, we were told she didn’t need to come back again for a whole year! I had to ask the cardiologist if he was sure?! Although it is a blessing, it is still a little scary.

As with many of the heart kids I have met and read about, Millie has always been described as being strong-willed and having a magnetic personality. Being a special education teacher, I have met other children who have had medical issues and I truly believe that some of their personality is developed based on what they have gone through at such an early age. Someone recently described Millie as “mighty” and that really t for me. She is my mighty strong, mighty persistent, mighty smart and mighty beautiful 3 year-old.